Erica and Kiddwaya have been really close in the house and this has left a lot of Erica’s fans concerned for her because she is dealing with a notorious flirt and playboy.

Erica has said it constantly that she is with Kiddwaya just to catch cruise and she only has physical connections with him while when she is with Laycon is all about the mental connection.

She has also told Laycon that she finds it difficult to choose between two men she likes and she doesn’t want to be in that position, so they should all just be friends and nothing more.

The Eviction hit everyone hard as they were all faced with making tough decisions on who will be going home. After a nerve wrecking day, the chattering and fun was reduced to a minimum and everyone retired to their beds.

Erica and Kiddwaya slept on the same bed and just by early morning, fans who do not sleep saw their sheets moving underneath.

They clearly saw that something was going on underneath those sheets between Erica and Kiddwaya and Erica’s facial expression made it all clear. 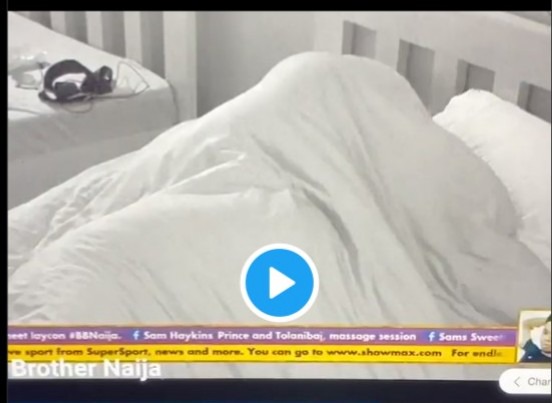 Some fans shared their disappointment on Twitter by saying that Erica should have held herself. Some said she is following Ka3na footsteps.

Some also said that Laycon needs to forget Erica because she has been imprinted on by Kiddwaya after what just happened between them. Laycon needs to focus on the prize and leave Erica for Kidd, she is far gone.

While most others supported Erica as she can do no wrong in their eyes and are more determined to vote for her.

Here are some reactions to Erica and Kiddwaya being caught under the sheets on Twitter.

First and foremost, be informed that this particular News above is not owned by 9jaBee In case of any TAKE DOWN {DMCA}, Please CONTACT US

My favorite place to visit during searches is Google, where I love to make researches on